Why do the Ignorant choose to remain in the dark on the subject of ISLAM? 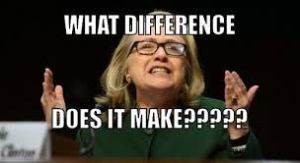 We gave a free seminar on the Threat of Islam to our local community where a Mosque and Islamic Cemetery is proposed.  An invitation to this event on a local neighborhood website started a discussion on the subject.  When given credible facts to support dialogue regarding the threat of Islam, a couple angry folks on this website responded.  These folks choose to remain ignorant by dismissing facts.  Credible facts.  Like documents used in a U.S. Federal Court.  They tried to say the court documents and the Koran weren’t credible sources.  These ignorant people refused to engage in a “peaceful” discussion on the subject and when they are unable to force their unsubstantiated opinions on others, they resorted to vulgar language, personal attacks (to divert from their lack of credible facts on the subject) and and name calling.  Why is that?  Why do these folks choose to remain stupid to a threat that wants to take their lives?  I don’t understand.  A man, lets call him John, bases his whole opinion of Islam based on the Muslims he knows.  He can’t (or should I say won’t) stray from his skewed limited understanding to venture out into the world of reality.  He can’t accept any scenario other than what his limited life experiences have provided.  It’s like I don’t accept that I have cancer until it kills me.  How insane is that?  As we get older, hopefully we get wiser.  I know that’s not true for all, but I hope for more than not.  I just wonder what it is inside these types of people that drive them to remain so “stuck” in their views that they can’t even for one moment consider any other alternative?  Any thoughts?